Reposted from the June 2018 issue of OCA Construction Comment

Meeting environmental, health and safety regulations helps keep your workers safe and protects the environment. Doing so effectively also safeguards your project timelines and budgets, and helps your company maintain a reputation as a reliable construction partner.

Working with a third-party environmental health & safety and occupational health and safety (EHS/OHS) consulting firm can increase your success factors. Below are guidelines on how to work positively with an EHS/OHS consulting firm, which are based on our firm’s experience in supporting builders here in Ottawa and across Canada.

We find that while project owners tend to be well aware of the need to meet EHS/OHS regulations, many still fail to integrate those considerations into their timelines and budgets prior to a project commencing.

It is important to anticipate issues such as the need to deal with potential hazardous materials like asbestos or hydrocarbon-impacted soil, and realize that there will be expenses and time involved in managing these materials. Being unprepared to deal with these concerns may absorb much of the buffer built into your costs and timelines. However, you can avoid potential problems by considering the required EHS/OHS issues in a project during the planning and budgeting process and then factoring these issues into your tendering documents.

It’s also possible to mitigate this issue by taking advantage of online and in-person courses making workers and supervisors aware of current issues in health and safety and environmental protection. Many EHS/OHS consulting firms offer these courses.

If the project is a renovation or demolition, it is important to have an EHS/OHS firm examine the property after previous users of the building have moved out in order to identify hazardous materials that may be present. There are many methods available to efficiently conduct a thorough inspection and provide material analysis. For example, this may involve controlled demolition of drywall walls and fixed ceilings to see how much asbestos is in the walls and on pipe insulation, or drilling test holes in the soil to check for contaminants. These procedures can determine if there are concealed hazards present.

This type of inspection provides early warning of potential problems that might have impacts on the costs and schedule and allow you to make required project planning adjustments.

Build a partnership rather than a transactional relationship

Like any business professionals, your EHS/OHS advisors can provide you with a wide range of advice and counsel rather than just performing a task that allows you to tick a box on a permit application.

This can include alerting you to new regulatory issues and public concerns – such as the increasing emphasis being placed on the dangers of silica dust, which can be produced any time concrete is cut, broken, drilled or polished.

Environmental and safety regulations vary greatly. For example, many municipalities have their own regulations on what kinds of waste can go into their landfills. Project owners in the Ottawa-Gatineau area need to be concerned about how regulations in Quebec differ from those in Ontario.

There are also specific regulations that apply to federally owned buildings that may be more stringent than their provincial counterparts. New changes to the Canada Labour Code Part II and documents produced by Public Service and Procurement Canada have changed some of the regulations surrounding asbestos in federally owned or leased buildings. Project owners should consult with local experts to avoid confusion and issues resulting from these changes.

The role of the EHS/OHS consultant on major construction, renovation and demolition projects is emerging. Working with these professionals is a key aspect keeping your workers safe, protecting the environment keeping your project on time and on budget. 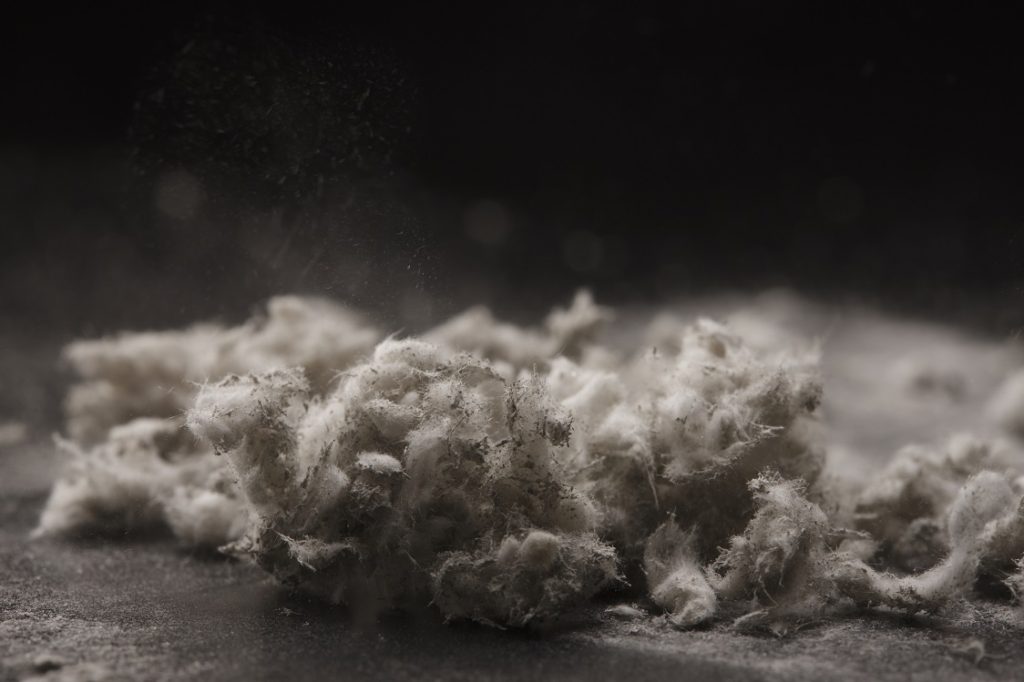 Asbestos. The word strikes fear in the hearts of building owners and inhabitants alike. Marketed as “Canada’s White Gold” in the past, this known carcinogen has become the subject of much confusion and debate in the public sector. Even though it’s been recognized as a toxic material since the 1930s, it’s curious how we still must worry about asbestos exposure in the buildings we live and work in today.

With the 14th Annual Global Asbestos Awareness Week (hosted by the Asbestos Disease Awareness Organization) underway, we thought we’d help shed some light on why asbestos is so prevalent and dangerous, what public offices are doing to deal with the asbestos-related issues, and how building owners can protect themselves.

Why is Asbestos Everywhere?

Asbestos is “everywhere” because before the 1980s, it was considered to be one of the most useful materials in the world! It was highly valued for its durability and versatility

The use of asbestos can be traced as far back as 3000+ years ago when inhabitants of what is now the Scandinavian region strengthened their pots and other cooking utensils with asbestos fibre.

It became more prevalent during the Ancient Greek and Roman periods as they discovered its fire-resistant properties. Asbestos was incorporated in all types of fabrics including royal wear, headdresses, towels, tablecloths, and napkins. It was also used to insulate buildings and ovens, and even as wicks for temple lanterns.

In the medieval period, asbestos was used to insulate armor. The rich and the noble also collected Ancient Greek and Roman artifacts, which included their famous non-flammable cloths. Charlemagne was said to have owned an asbestos tablecloth that he used to impress guests by setting it on fire and removing the cloth undamaged.

The industrial revolution realized the development of countless asbestos products. With powered machinery and steam power gaining popularity, a means to control the immense heat required to create power was needed. Asbestos was the perfect material to insulate steam pipes, turbines, ovens, and kilns.

The demand for asbestos was so great that asbestos mines all over the world started opening. In Canada, the first commercial asbestos mine opened in the 1870s, soon followed by Russia, Australia, and South Africa.

As technology moved from steam power to diesel, asbestos’ insulating abilities continued to be in high demand. By the 1930s, people had adapted its uses to the shipping, automobile, and construction industry. It was used for brake and clutch lining in cars. In ships, they used it for insulation to parts exposed to high heat. In residential, office and industrial buildings, it was used for fireproof drywall, flooring, roofing, gaskets, pipe insulation, fire retardant coating, bricks, and cement. It was also incorporated into building materials as it increased the pliability of mastics and mudding compounds, and served as an effective acoustic dampener.

The trend continued until well into the 1980s, when medical journals started publishing articles on the harmful effects of asbestos. The medical community had been reporting on the dangers of asbestos for years (even in Ancient Roman times, Pliny the Elder, a naturalist and philosopher, had cautioned people against using slaves who had worked with asbestos because they had poor constitutions). However, they were disregarded due to the popularity of the material. It was only due to the increasing reports of diseases related to asbestos exposure that public attention was drawn.

In response to the growing statistics of occupational related illnesses and death linked to asbestos exposure, the government established strict processes to control and manage all aspects of removal. Unfortunately, with the millions of buildings and homes that were constructed using asbestos containing materials in the years prior, the lasting impacts of its extensive use was difficult to remediate.

What Makes Asbestos Harmful and What are its Effects

Asbestos, in its simplest form, is naturally occurring group of minerals which can split into microscopic fibres. Should the fibres become airborne, they can easily be inhaled and, due to their shape, imbedded to the tissues of the lungs and other parts of the respiratory system.

Because asbestos is impervious to chemical degradation, the material remains in the respiratory system. This causes inflammation, which can eventually lead to various chronic health issues including the following:

Based on World Health Organization (WHO) statistics, about 125 million people in the world are exposed to asbestos in the workplace. In Canada, CAREX estimates 152,000 exposed workers. The Ontario-based Occupational Cancer Research Centre reports that this wide-spread exposure causes almost 2,000 new cancers each year in the country.

What is Being Done to Deal with the Issues?

The WHO declared asbestos as a human carcinogen more than 30 years ago. Partial bans are in place involving the use, sale, and import of asbestos in all G7 countries, including Canada.

In January 2018, Canadian Environment and Climate Change Minister Catherine McKenna announced that Canada would be “…launching… new, tougher rules to stop the manufacture, import, use and sale of asbestos.”

In addition, asbestos removal and management is now highly regulated to protect workers and the public. Abatement of hazardous materials is often the first step taken before a demolition or renovation project can proceed. This requires strict adherence to building codes and safety legislation. In Alberta, only certified workers can participate in asbestos abatement.

What to Do if You Suspect Asbestos in Your Home or Workplace?

Brad Burwash, CRSP, Division Manager of EHSP’s hazardous materials consulting group, said, “If you suspect you might have asbestos, you need to do a comprehensive survey to determine asbestos types, quantities, and condition.”

“The best way to deal with asbestos in buildings if you find it is to ‘manage it in place’ if it remains undisturbed, otherwise some other specialized abatement techniques may be required.”

The legacy of asbestos in buildings will remain with us for decades. The solution to managing the exposure hazard and the ultimate health risk is proper assessment and management of the material.

During Global Asbestos Awareness Week, we are reminded that action is needed to keep our citizens safe and healthy. Awareness of the hazard is the first step in managing occupational illness and prevention is the best method to manage illnesses associated with asbestos exposure.

If you require more information and need to get help, there are numerous government websites that offer advice (check out our sources links!). You could also contact us at 1.877.243.6838 or at info@ehsp.ca.